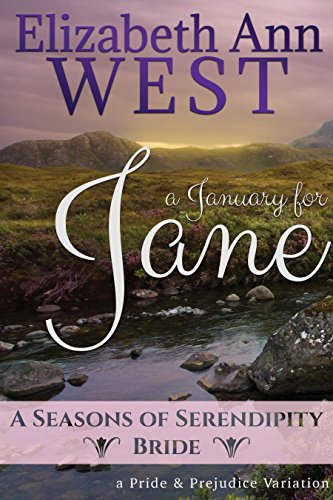 A January for Jane: A Pride and Prejudice Variation Novella (A Seasons of Serendipity Bride Book 1)
By Elizabeth Ann West, a Lady
(14 customer reviews)
View now

Hiding at Mr. Darcy's Scottish estate with her orphaned, illegitimate nephew, Jane Bennet begins to fall for Graham Hamilton. Homeless from the fire destroying Blaylock House, Mr. Hamilton has stayed at Starvet House since the Darcys left for London, and is everything a gentleman ought to be. But as his own feelings begin to consume him, he has to break through Jane's unwillingness to experience any happiness for herself. This bonus novella in the Seasons of Serendipity series explores the love story of Jane Bennet and her Scottish lord!


"I like new beginnings." Jane shrugged her shoulders, closely inspecting the hardy lavender stalk before her. "Gardening is full of new starts and happy colors."
"I had come to see if you wish to take luncheon together." Mr. Hamilton had very lately taken to inviting Jane in a very formal manner for each of their meals. The two began living at Darcy's Scottish estate out of necessity. Graham Hamilton, with his own home burning down at the end of last summer the night before Robin's arrival, rejected living at his parents' estate on the premise of freedom and to offer Darcy's sister by marriage a gentleman's protection. Jane had remained so that she might take care of Robert Bennet, the bastard child of George Wickham and Lydia Bennet, without the prying eyes of English society.
"I'm afraid I ate my meal before seeing to my work." Jane was not being honest, but she found herself uncommonly out of sorts around Graham. Her heart's beating would increase and she knew herself to be excessively attracted to the man's kind nature and handsome features.
But there was no hope for Jane Bennet to find a husband. No, her heart and soul had to belong to little Robert if the child was to have any hope of surviving.
Mr. Hamilton frowned but did not allow Jane's refusal to stymie his aims. Seeing her finish the lavender pot, he reached forward to lift the clay vessel to Jane's complaints.
"Mr. Hamilton, you really should not -"
"For the hundredth time, Jane, we live together. After nigh on seven months, don't you think you can give it up and call me Graham?" He offered her a sly smile, placing the pot on the windowsill next to the rosemary, then walking back to stand next to her on the opposite side of the workbench. Jane ignored his closer presence and insistence about their Christian names even though she found his calling her Jane a sign of affection she desperately cherished. But though she enjoyed his attentions, it was a wretched thing for her to raise his hopes knowing full well she could never accept the suit of a man so long as she wished to keep Robin.
With only one seedling left, Jane accepted another pot from Graham and added a healthy pile of soil into the clay round. A wisp of hair loosened from her bun and she exasperatedly blew out a breath to try to move the offending lock. Ever so gently, Graham reached out with his gloved hands, hands that were heavily damaged in the fire at Blaylock, and tucked the hair behind her ear. Jane had not meant to, but naturally her head leaned into his hand as he cupped her face for a second longer than necessary.
The last few weeks of desire that had been building between the two of them, grown adults with duties and responsibilities, yet a natural attraction, became too much for either to bear. The stocky, rugged Scotsman leaned forward and pressed his lips against Jane's with the wishful thinking of a lovesick suitor. For her part, Jane returned the kiss, remembering just in time that her hands were filthy before she reached out to touch Mr. Hamilton in kind. But remembering the state of her hands broke the spell, and as the kiss ended with Mr. Hamilton keeping his eyes closed--a schoolboy smile across his face--Jane wrung her apron to clean her hands as she dashed from the conservatory.